The morning after the prizegiving, swapping stuff  and a big party. 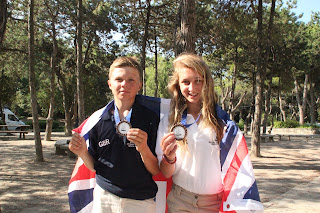 Great Last day at the Euros and a GBR Bullet.

Hi, well we have been out in great sea breeze conditions today. The wind filled in at about 1200 after a cross offshore overnighter.
The wind built to 10-12 kts and there was the odd Italian white horse.
There was a 1500 time limit on starting races, so there were 2 girls races and just one boys  race which was a shame. 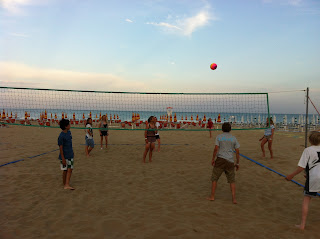 Race 1 girls saw Jen sail like a rocket ship and narrowly miss a bullet coming a close second, and Sarah finished 11th. Karyina was in the next race and finshed in the 20's.

The second girls race involved an activity called hiking, Sarah sailed very well to finish 5th in her last ever race in an optimist and Jen was about 14th on a very close finish on the line. 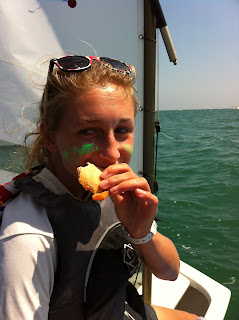 Jen having some chicken before the first race of the day note the green war paint.

There was only one boys race within the time limit of 1500 in a great breeze. All 4 boys were in the yellow flight. David owned the pin, Dan was 5 up, Robbie a bit further towards the boat with Benno.
At the gate it was David leading and he did a masterful job to take the bullet up a long second beat which was covered in clumps of  weed.
Dan came in 5th and Robbie 'I undestood today' was 8-10th. Benno struggeld a bit up the second beat in the freshening conditions. 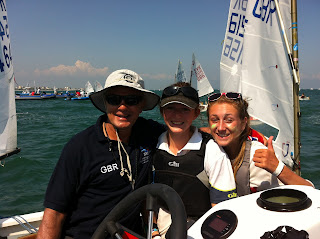 A couple of happy girls on the last day at the euros. 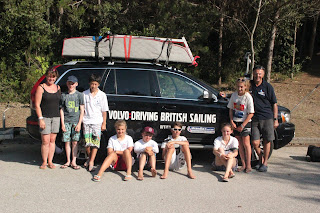 Team GBR at the Europeans 4th team - not too bad then. 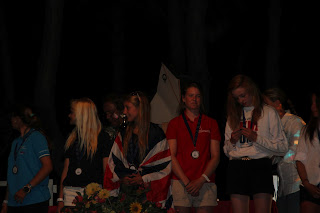 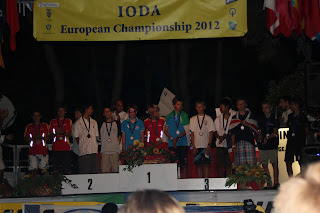 Evereyone is partying right now so a final wrap up in the morning.

After 7 hours of hanging around the race officer finally gave up and canned Friday here at the Oppy Euros.
Massive thunderstorms and 35kts of wind made it impossible to sail today.
Jen is currently 13th European and David 16th European. 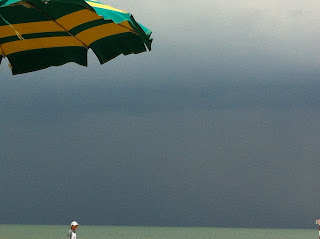 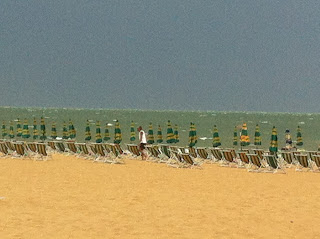 Nome one sunbathing in the sandstorm 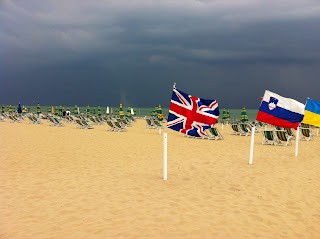 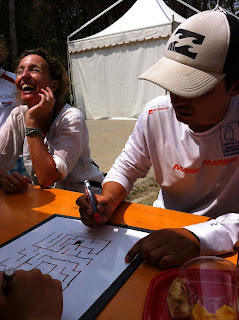 The Dutch playing join the dots 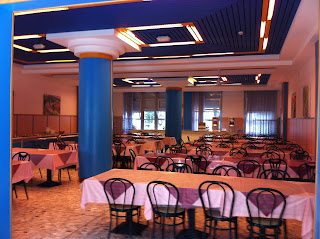 One of 9 dining rooms in our accommodation.

It was all cool this morning but the wind was south east then went south west, the sea breeze direction The sea state was all over the place, bow into waves on starboard and smooth as on port, nothing unusual. 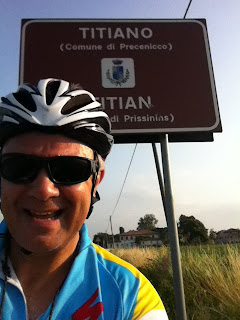 Alan went riding at 0600- he made a mistake with his watch and went and hour too early, he found this strange village in the middle of nowhere on a 45 km ride.

Back to the day.......
The girls went first, Jen had a poorish  first  race after a great start but came back with top 5 in the second race of the day. but is still in the top 20.

Sarah had a great 4th then a tricky second race in the 20's.  Sarah's Maisheet shredded as she left the RIB to start a race but we had a spare. Sarah moved up to 49. 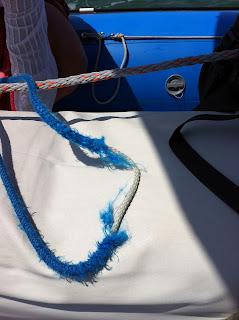 Karyna had a 20 and a bit of a shocker- but is in good spirits and is mid fleet.

The 3rd girls race was abandoned at mark 2 with Jen in 8th and the blue fleet couldn't even start as it clouded over and the wind dropped to tiddly sqwat. Then after the AP  over  A  a solid 15 kts filled in for a couple of hours!
The boys had a challenging day to in the unstable breeze, Dan had a late 20's and a 13-14. Robbie had a yellow flag on a general recall and 2 reasonable early 20's  races.
Benno had a shocker of a start in the first race of the day but pulled through to a 20ish and then was 6th in the second race round the leeward gate but dropped to the ealry 20's on a fetchy thing to the finish.

David had a teen in race one of the day when the wind failed to shift back-is it persitent or will it shift back?,   and in race 2 the wind died at the gate and David and Benno close reached to the finish David was inches away from a win and Benno got dumped to an early 20. All a bit mean  really. 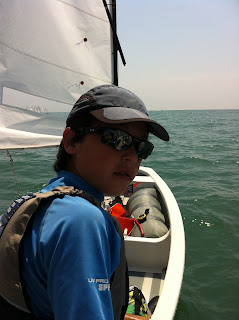 Robbie thinking about the shifts, is it persitent or will it shift back? 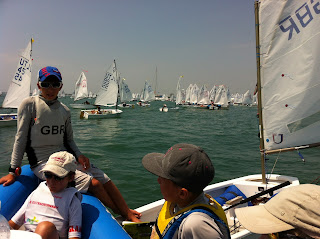 We are off for a Pizza and more news later
Posted by Unknown at 09:20 No comments:

Ola, we had the dejavu breakfast to start the day of, the same everyday, rolls, cheese, ham, yogurt, but  with coco pops to make a diifference and Jen tucked into a monster nutella roll- yummy. 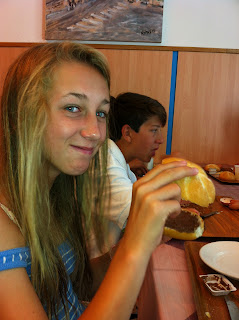 Then we had the coaches meeting where the race committe explained that about 100 boats had been PDI'd about 5 points each for being in the waiting area. [ It happened again today but nothing really happened- odd really].

We had to take David's replacement rudder to be measured because the measured one was broken, see below. The measurement was all good. The hand is David's. 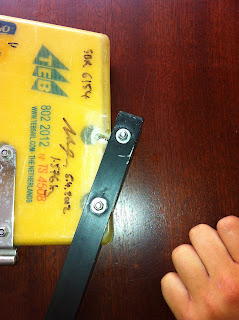 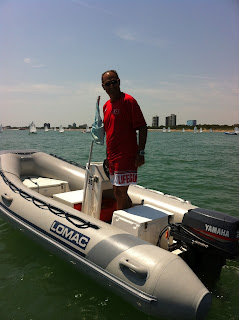 Then we went afloat after a long delay at about 1300,  girls first The picture is of Massimo who used to be the Italian coach, who was shuttling coaches out to the RIB's - see how far the shore is, and Massimo was wearing a Turkish lifeguard outfit.

The sea breeze filled in over 2 hours to a lethargic wandering affair at 3-5 knots, and we raced from 1400-1700.
We reflighted our colours today.  Sarah and Jen were yellow, and Karyna  blue. 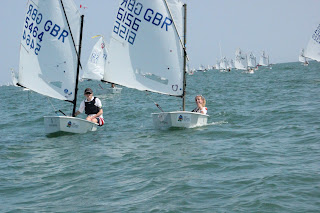 In the first race of the day, Sarah was t boned by a Turk from to winward, who shunted Sarah and stopped her dead with 5 seconds to go. The Jury were watching and yellow flagged the Turkish girl.
Sarah recoverd to a good 22. Jen nailed the boat end and tacked off coming out a useful 11th.
Karyna was doing well in about early teens and got the gate wrong to slide down to 36.
In race 2 Jen was yellow flagged off the start and DFL, fortunately she went left and popped out 13th would you believe. Sarah started at the boat and ended up in the late 20's.
Karyna  had a much better race in 14th - a light light wind.

The boys came out an hour after the girls it was all a bit of snakes and ladders.  David had a 22 - wind went persistently right, and a great 5th, it took 5 minutes for him to measure, one boom tie was close but just OK. 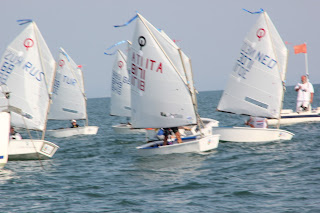 Robbie had a better day and was closer to  the front the next pix shows the difference between 10 ish and 17th. Robbie is getting in tune with his artistic side more and sailing the fleet and shifts more easily.
Benno had a steady day several shockers of starts and recovering to a 21 and 11. Benno's tacking improved too.
Campbell had a tough first race but came back with a good top twenty in the second race of the day.
After dinner we went for ice cream and some music therapy before going to bed.
Jen is currently 17th David 16th and Dan 25th everyone else is making progress up the fleet.
Jens, Robbie's and Karyna's mums have arrived and are getting used to the nice warm weather.

Hello from Tuesday, here in Lignano. A slighlty different day today which Alan noticed at 0700 on his customary flat 20 mile ride [ today in 58.40] - not bad on an old bike.
There was an onshore breeze with a bit of chop which carried on all day and started to die away late in the afternoon.
The breeze was shifting a lot and within the start sequence it shifted a lot, being really aware of what was happening- was essential

The blue girls fleet didn't get a race in yesterday so they went afloat first and Jenny scored a happy 9th. in race 1, Jen went on to score a 5th in race 2 and a modest 23 in race 3. Jen is currently 15th. 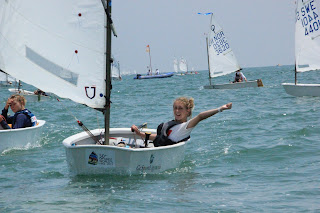 Sarah scored a 14 after a great start in race 2 but after a nearly great pin end start in race 3 suffered a shocker. Karyina scored a useful 20 but then had a black flag to finish the day off  with.


The boys came out and then we raced around for lots of continious racing, which was possible because each colour was only racing itself for the day. 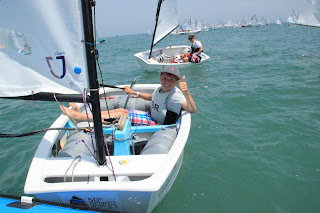 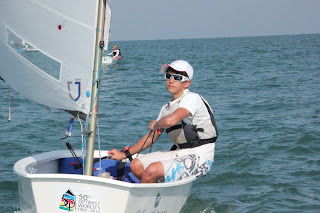 Robbie had a day of being caught in the middle and getting to grip with the shifts, scoring 31, 18 and 36.
Benno scored a great 2nd, then a 21 and then suffered a tough start at the boat for a 50 [ gulp]. 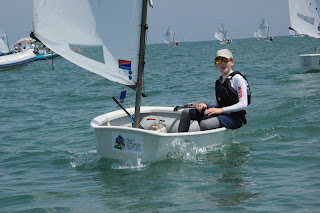 Some other stuff,  David's rudder broke and had to be replaced. the rear  bolt holding the tiller onto the rudder broke through the foam, it wasn't screwed through the epoxy.
Unfortunately my camera failed when Tim Cropley went oppy sailing yesterday, which was a great sight to see but only a few of us witnessed it.

Poker  Sailor Face
We played a game where each sailor had to stand up infront of the group and the group had to try to make the sailor smile. It was really funny and put a smile on everyones face. 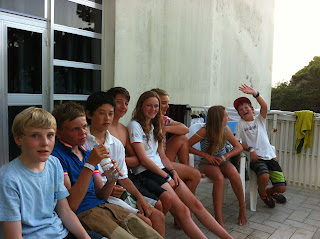 What a First Day at the Euros.

Hello all, today was the first day of racing, first of all this morning we had an arguement  with the measurers about some insulation tape on the tack string wich they said was illegal, but it hasn't been illegal for the last 10 years.   The tape just stops the tack tie slipping forward. Maybe if it was black tape noone would have noticed. 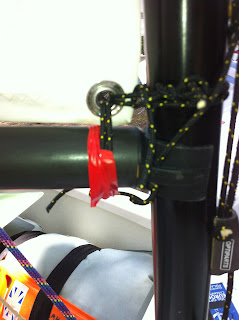 We went afloat at  1300 and started a race at 1630 so it was a long time afloat but we have a nice pink umbrella to keep us cool. There are only about 50 boats in each flight and there are 5 flights -3 boys flights and 2 girls flights.
The race officer did a good job in the face of adversity, 2-4kts from the south with a strange choppy sea state.
Race 1a was David and Robbie. David came off the Pin and was in the top 4 at the leeward gate, Robbie had a black flag boat above him which spoilt his start. The wind went 30 degrees left and it was a fetchy thing to the finish. David was about 8th after going to what he thought should have been the finish and Robbies was about 30.
Race 1b was Benno and Campbell [Bermuda]. Benno had good start initially but lost his lane too early and was forced into tacking, and Campbell had a challenging start too.
Benno and Campbell finished mid fleet.
Race 1c was saw Dan own the boat end on a square line, but he hung out too far on the right and lost quite a lot getting back left.
Girls race 1a saw Sarah dominate the boat and Karyina struggle at the pin, a 35 degree shift later up the windward leg saw Karyina 3rd at the windward mark and Sarah deep. 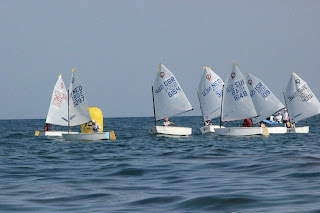 David 3rd at the leeward gate in a Ned sandwich.

Jenny was our only sailor in race girls 1b, and after smacking the committee boat Jen did a few turns then dominated the boat end only to realise that the wind had gone so far left that it wasn't possible to make the pin on starboard. Fortunately the race officer came to the rescue and AP'd at 2 seconds and saved Jen's day, and her race never got away.
The race results aren't up yet and there were lots of black and yelow flags- but not ours.
Another day to look forward to tommorrow.
Dan and David now have a new fan to keep their room cool at night lets hope it stays in one piece unlike the their old one.
Bye for now.